If you have a website and would like to boost its ranking on the Search Engine Results Page (SERP), you may want to consider a social media strategy on Google Plus – also known as Google+. 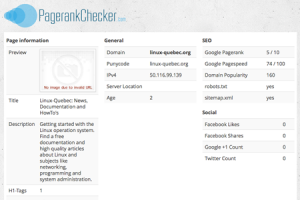 A domain registration and a website form the basis of an online presence, and at one point those two components and an e-mail address were the sole foundations of Internet properties. Now that online social networking has become the center of Internet activity, websites are expected to establish a social media presence as well. There are several options, starting with the wildly popular Facebook and its rival Google Plus.

Online social networks come and go, as evidenced by MySpace and Friendster, and many webmasters choose to establish a presence in several of them at once. The typical trilogy involves Facebook, Twitter and Google Plus. Other webmasters prefer to narrow their social media presence to trendy and burgeoning networks like tumblr or Pinterest.

If the motive behind joining a social network is to boost SERP ranking, webmasters should strongly consider Google Plus – but only if they are willing to follow a certain strategy that goes far beyond setting up a Google Plus profile.

With regard to the effect that a Google+ profile has on organic search results, the company claims that search ads with social annotations will have an improved click-through rate between 5 and 10 percent. This is due to the increased traffic that a strong social footprint brings, but it must be cultivated. This is not limited to Google+; in fact, any Internet property with a strong social media presence can increase traffic to a website, which in the long run is an influential factor for organic search and SERP ranking.

Google will also reward popular profiles with higher SERP placement, and to this end it is vital for webmasters to try to be in as many Google Plus social circles as possible.

Internet users flock to online social networks to find fresh content and to be engaged. A webmaster who decides to set up a Google+ profile must frequently provide followers with appealing, and must also engage followers by answering questions, providing recommendations and responding to comments. This will eventually translate into more followers and a higher rate of +1 clicks – the Google equivalent to Facebook’s “Like” button.

If you are a webmaster and you want to get a quick overview about all the social signals of your own domain like f.e. Google +1’s, Facebook Shares and Twitter Counts you can use serveral special services. One of those is PagerankChecker.com which allows you to get all kind of social signals for your website.

Posted in Miscellaneous. Bookmark the permalink. RSS feed for this post. Trackbacks are closed.